What is The Wisdom of the Crowd Theory?

The Wisdom of the crowd theory is a doctrine that a big group of diversified people is collectively smarter than an individual expert when it comes to estimation, speculation, problem-solving, decision making, innovating, and predicting.  The collective wisdom can also help predict trends in the future, as we will show below.

This concept has been in people's minds and had found its way into several papers. Still, it was a combination of Surowiecki's books, published in 2004, and social information websites such as Quora and Wikipedia that brought it its vast popularity.

As the book was called, the Wisdom of Crowds posited that groups of people made better decisions. These decisions were not restricted to specific fields, but even when it came to something as uninteresting as most pop culture, it proved superior. In this age, where democratic government and global leadership are lauded, it is essential to find out if the majority makes trustworthy judgments.

Don't miss out on the fun of playing wisdom of the crowd games. Answer the questions and compare yourself to the crowd. 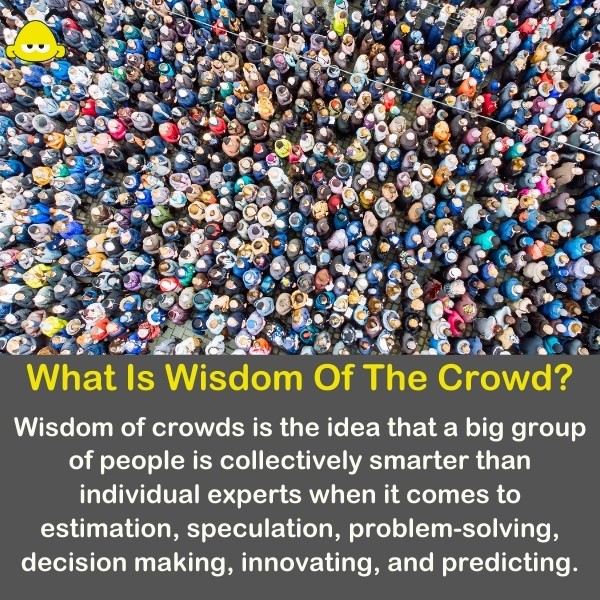 The Definition of "Crowd"

The term "crowd" can be defined in several ways when it comes to this concept. One way is that it is a group of people amassed by an open call for participation. The crowd through online media has titled The Lord of the Rings as the most excellent work of literature of the 20th century, and you need not be a literary snob to consider the validity of its so-called wisdom. 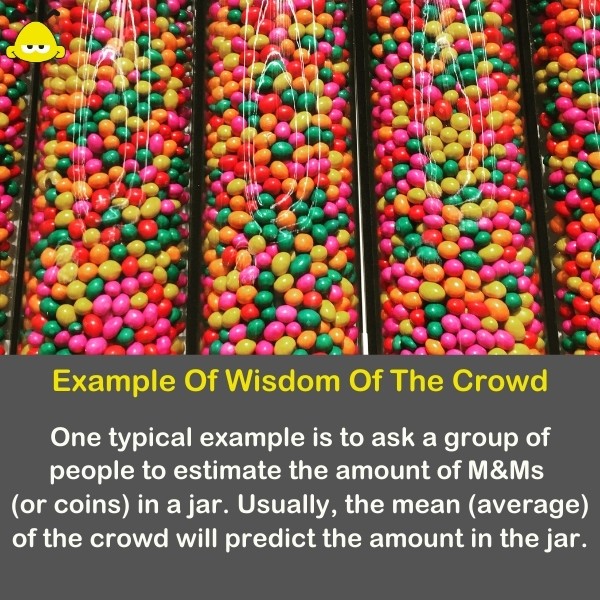 When you think of crowd behavior, pictures of mob action, crazy cults, and abstract social pressures usually dance in our minds. The panic and herd instinct that causes such unions are easily swayed. In an era where individualism is promoted, it is surprising to see that judgment is still considered superior when it comes from a group of people instead of an individual.

Some scientists came to the forefront and made it clear how this phenomenon comes about.

Sir Francis Galton was one of those multifaceted people that show up in our history textbooks. He was an English explorer, geographer, meteorologist, anthropologist, and eugenicist. It makes you think that perhaps social media is consuming a chunk of the time we could be using to become experts in multiple fields.

He is remembered for his groundbreaking studies on human intelligence and introducing the world to statistical concepts known as "correlation" and "regression." However, a title he may not be proud of today is the "father of eugenics."

His father died in 1844 and left him a lot of money that let him pursue his many interests. He ventured from the Nile to Khartoum. By 1859, Darwin published his influential and controversial "Origin of the Species," which played a big part in shaping Galton's intellectual pursuits. 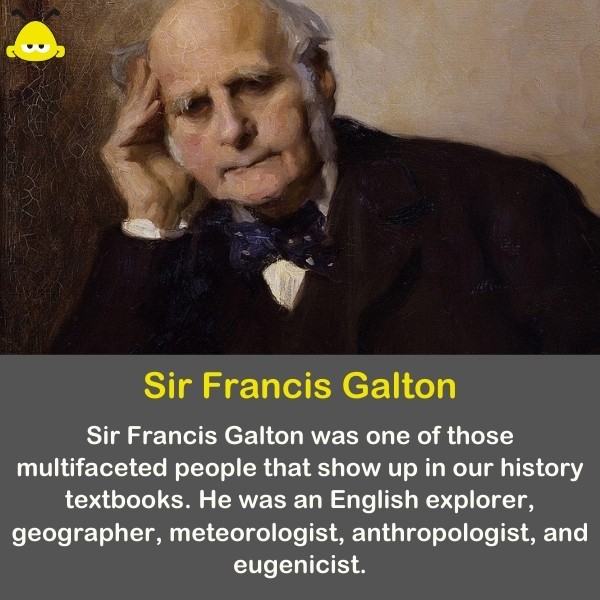 The wisdom of the crowd discovery - the case

In his later years, 1906, to be precise, Sir Galton made a discovery. This concept is referred to as the wisdom of crowds. His discovery was precipitated by his visit to a farmer's fair in Plymouth, where he watched people compete in a guessing contest. The object of the crowd of 800 guesses was the weight of an ox. The ox was butchered and weighed; Whoever got nearest to the actual weight would carry home a prize.

The competition was a unique social situation since it was not influenced by oration, emotional appeal, and the rest of the tactics used to sway groups of people. Tickets were purchased at a relatively hefty sixpenny fee, which diminished anyone's chances of being silly with their guesses. Finally, who would not want to give it their best shot in hopes of winning the prize.

His statistician side spoke to him at that moment since he collected those 800 tickets and analyzed them. Each competitor was likely as qualified to decide a public policy or political stance as each voter is today. The variety among the voters was probably similar to the weight guessers. Some guesses were even weeded out as illegible or defective, just like ballots are, and only 787 remained. Sure, there were a couple of outliers, as with most statistical data and opinions. 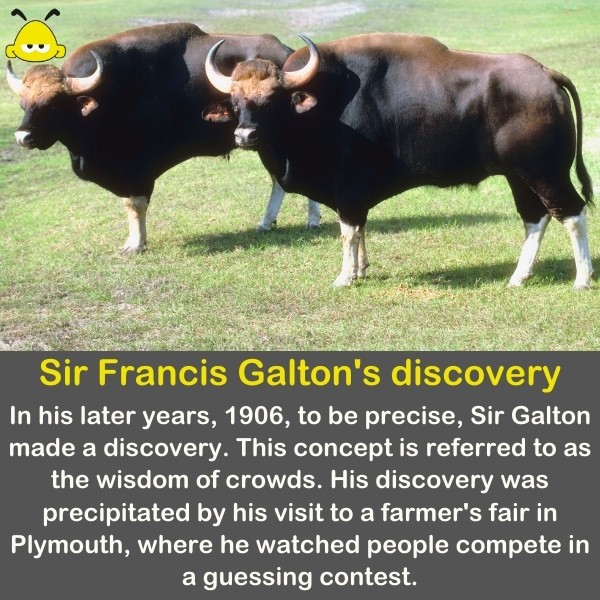 The result of the crowds guess

Galton arranged the votes in order of magnitudes. In keeping with the democratic principle of "one vote, one value," the median estimate was the vox populi (i.e., the voice of the people), and other estimates would be categorized as too low or too high by most of the voters. The middlemost view here was 1207 pounds while the weight of the ox really was 1198 pounds, making the vox populi (voice of the people) 0.8 percent of the actual weight, too high. To learn more about animals, play our animal trivia quizzes. 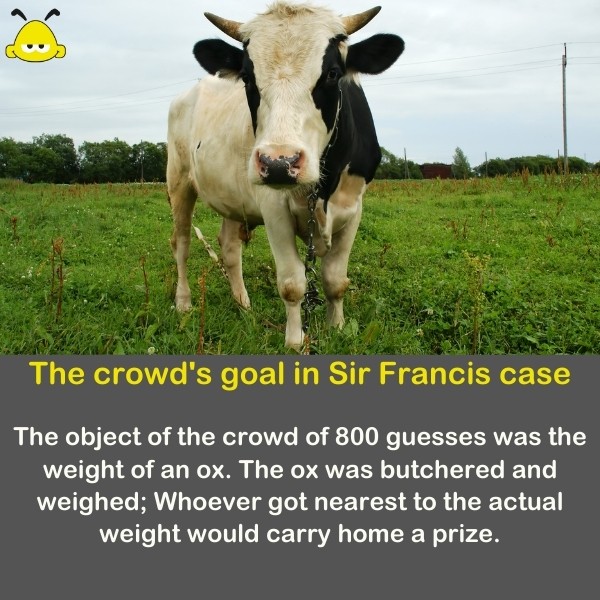 He computed that the competitors' average guess was extremely close to the ox's actual weight: 1,197 pounds against the real weight of 1,198 pounds. The winner was much less accurate. This was a sign that maybe democracy of thought was better at producing answers. 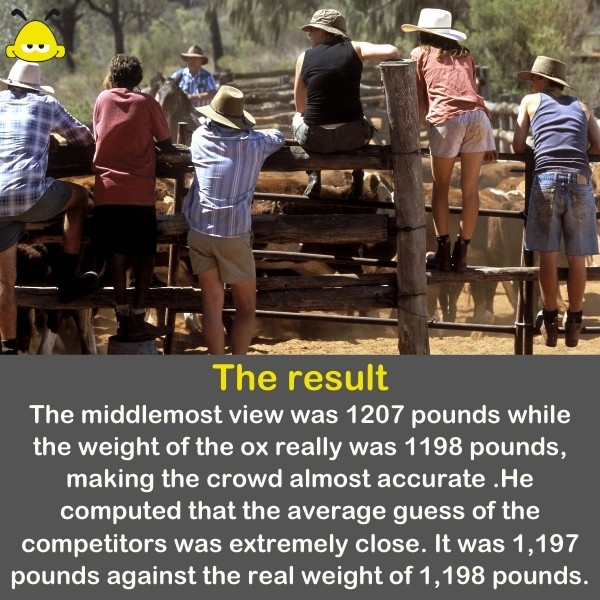 James Surowiecki: The wisdom of crowds shape our lives

His book opens with the story of Galton, as discussed above. It deals with a collection of individuals reaching conclusions on their own instead of using what is known as crowd psychology. 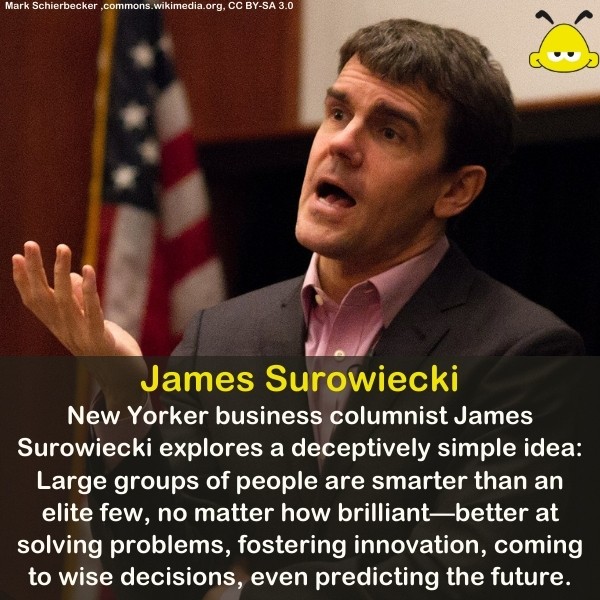 Crowd behavior, according to Surowiecki

Crowd behavior, as traditionally understood, was said to be highly influenced by the loss of responsibility of the individual and the impression of the university of behavior. These two components increased proportionally to the size of the crowd.

Galton's work inspired the central thesis of this very popular book. It sought to educate the masses that a collection of independent decisions from individuals is more certain to lead to the right choices when compared to that of one person, even if he is an expert. Its title was meant to antagonize Charles MacKay's Extraordinary Popular Delusions and the Madness of Crowds, which was published in 1841.

Humans make the mistake of giving credit for failure or success to an individual when these events are more likely to be manifestations of several forces outside the person. Surowiecki suggests that a performance that gets better consistently is more easily achieved by an aggregate of several inputs from people instead of one person calling the shots.

Surowiecki does not give a strong argument for or against the role of experts in the field in which a decision is to be taken. However, in his afterword, he posits that the expert has to be present to give information as no individual or the crowd can make good decisions without data.

How do Experts think?

Studies meanwhile have shown that experts, just like we regular people, tend to be overly confident in their understanding and stumble into the "illusion of knowledge."

The book is divided into two parts. The first part offers a lot of examples of problems and how crowds attempt to solve them. Simultaneously, the second part gives insight into conditions that must be put in place for the group to think up the right solution.

The advantages of disorganized decisions of the crowd

Surowiecki breaks down the advantages he has noticed in disorganized decisions into three categories:

This has to do with thinking and processing. He says that it is faster, more reliable, and less subject to political forces than that of experts or their committees.

He examines how common understanding in a culture lets people make surprisingly accurate judgments of other people in that same culture.

This describes how networks of people are held together by trust and not a central system that polices behavior. This section of the book really supports the idea of a free market.

Surowiecki still admits that not all crowds are wise, which takes our minds to the mobs, cults, and stock market bubbles.

He then creates criteria that would help us distinguish a wise crowd from those that are not so much:

Every individual should have personal information, even if it is one that's a weird conclusion from a known fact.

There is a relative lack of influence on individual opinions by the people around them. 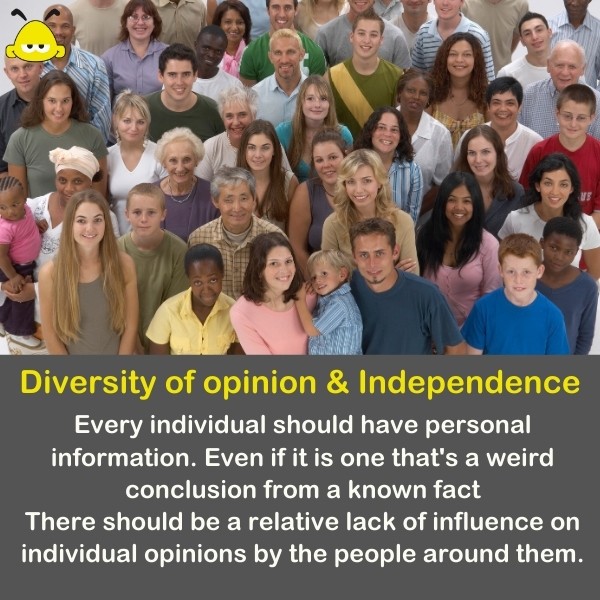 People specialize and take something from local knowledge.

There is a means by which private judgment can be collected.

Individuals see the collective as fair.

"Who Wants to Be a Millionaire?"

One great example is the "Ask the Audience" option in "Who Wants to Be a Millionaire?" When the question is complicated, and most people do not know the right answer, the majority vote randomly. These tend to cancel each other out as noise since randomly selected are equal among the A, B, C, D options. That is, each option has a probability of being picked as 1 in 4.

Only ten people in the audience know the right answer, and their votes are enough to make a difference and emerge slightly as the correct one. In all my viewing of this TV show, I have never observed the crowd being off-base. However, so many times, phoning a friend who you believe is a connoisseur in that area or generally quite knowledgeable leads to failure. 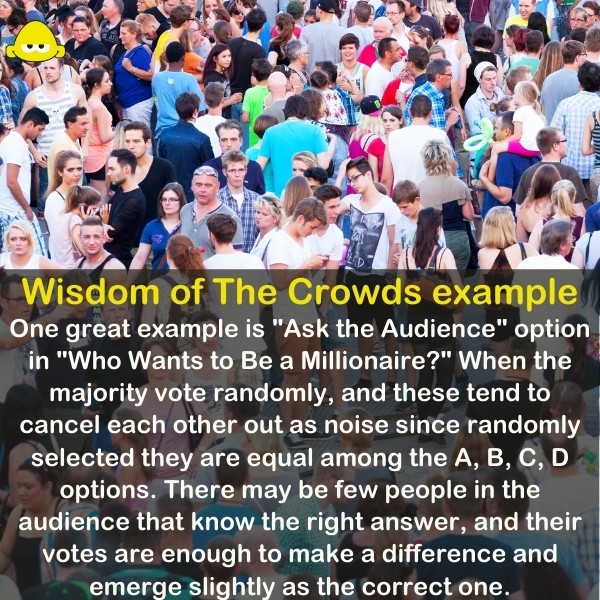 Trails designed by the crowd

Another excellent example of the wisdom of the crowd is when you go hiking. Take a look at the trails. They are usually good, routing around natural hazards and leading to exciting locations. This system works because as individuals blaze their own paths, the best ones get more use, and over time, it gets more defined. 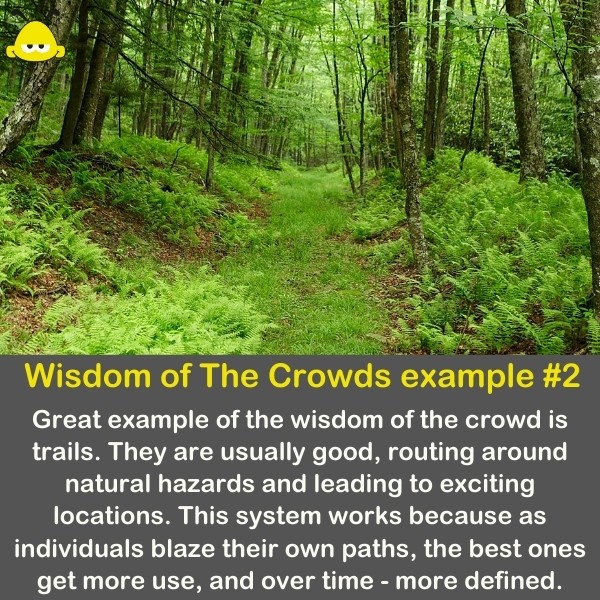 For more fun and comparison to the crowd, check out the Quiz Beez home page, or explore more interesting blog posts.