What is Collective Intelligence And How It Can Help You?

If you are wondering what this term connotes and it's making you scratch your head in confusion, then here's a helpful description, 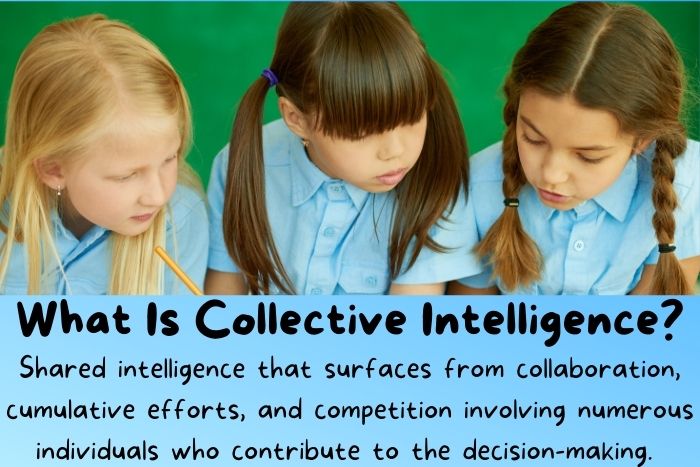 What Is Collective Intelligence?

The field of Collective intelligence is a commonly shared intelligence that surfaces from collaboration, cumulative efforts, and competition involving numerous individuals who contribute to the consensus of decision making.

The term is frequently used in sociobiology and political science. The term also appears in the context of crowdsourcing applications and mass peer review. Collective Intelligence may also comprise social capital, consensus, and various formalisms such as social media, voting systems, and additional means of measuring mass activity.

Collective Intelligence is used to obtain a single value estimate of something. For example, the release date of a particular product, the weight of an object, the success rate of a project, etc. We try to collect the average values derived from the estimates provided by the crowd members. This is known as the elicitation of point estimates.

Collective Intelligence is also used in collecting opinions from the crowd regarding a project, idea, or issue. For example, ratings of products sold on an online website such as Amazon are based on the rating of people that sell or buy these products.

Amazon also provides recommendations based on the customer's recent purchases and interests. Ratings and reviews heavily influence the market value of a product. This entire engagement with the website accounts for collective intelligence. The primary motive is to simply aggregate the ratings/reviews allocated by customers.

While working as a collective, one might put forth specific ideas regarding designs or projects. For example, If you are developing a t-shirt design or solving a numerical. The objective is to gather ideas and devise a method to choose the best from the lot.

Actors performing improvisation also experience a kind of Collective Intelligence, which they might denote as "group mind." Theatrical improvisation solely relies upon agreement and cooperation.

The internet has been a great enabler of collective intelligence. The prime example is the online encyclopedia known as Wikipedia. Anyone can contribute to the page or can create a separate page of information.

Another prevailing example is online multiplayer games such as Call Of Duty, PUBG, etc., where gamers come together as a community. 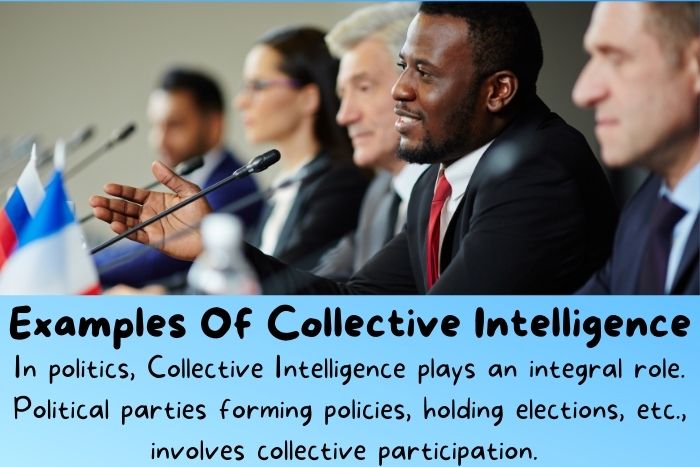 Credit companies have devised various ways to detect financial fraud. Neutral networks and inductive logic are employed to verify the legitimacy of transactions.

By incorporating Collective Intelligence, government agencies gather information from every corner of the globe, which is later analyzed to study various patterns that may indicate potential threats.

Collective Intelligence Vs. Wisdom of the crowd

What is Wisdom of Crowds?

To explain it in simple words, the Wisdom of the Crowds is a conception that supports collective participation. The idea suggests that a large group of people intellectually outweighs individual experts when it comes to innovating, problem-solving, decision making, and predicting. The concept was first introduced to the mainstream by James Surowiecki in his book, "The Wisdom Of Crowds," in 2004.

The book further stated that for a crowd to be wise, it should possess several key characteristics. First off, the individuals comprising the crowd must be characterized by different opinions. 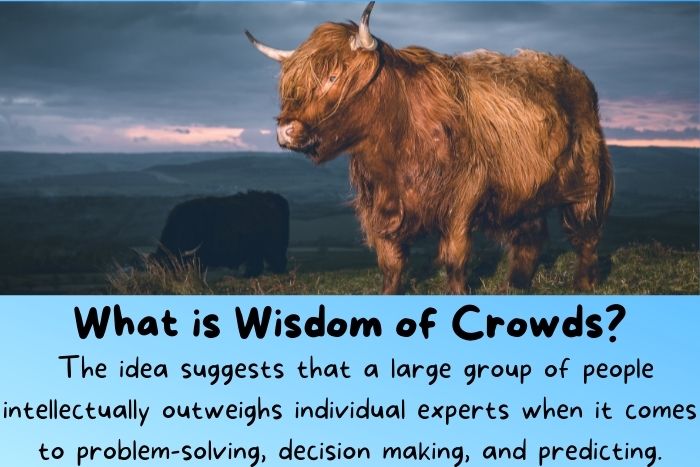 Secondly, each person's opinion should be independent of the ones around them. Third, the individuals participating should develop their own opinion based on their understanding and knowledge. Lastly, the crowd should be capable of aggregating individual opinions into one collective decision.

According to the research held in 2018, the wisdom of crowds theory was further improved and updated. Individuals were questioned both privately and in a group, and the study concluded that the responses from the groups were more accurate as compared to individual responses.

Some important distinctions are often missed or blurred out between Surowiecki's Wisdom Of Crowds concept and Pierre Levy's concept of Collective Intelligence. Both of these concepts start off with two very different premises and also lead to two very different conclusions.

Wisdom Of Crowds seeks to accumulate anonymously produced data to observe the wisdom emerging when many people enter their own individual inputs without influencing any other person's findings.

However, Levy's concept focuses primarily on the kinds of deliberate processes undertaken in order to share and evaluate the information produced by various individuals to reach a consensus.

However, Surowiecki's conception is only applicable to quantifiable data. The core idea can be summarised as given a large and diverse population offering their best possible inputs of probability, the average of which will be more accurate than individual responses.

This limits the scope of application and is only useful when the output of each individual is averaged out mathematically—for example, market predictions, guessing weight, etc.

There are various obstacles an organization might face when it comes to good decision-making. The majority of the time, these obstacles could be quite easily avoided. All you have to do is incorporate the right kind of approach. Here's how collective intelligence encourages effective decision making:- 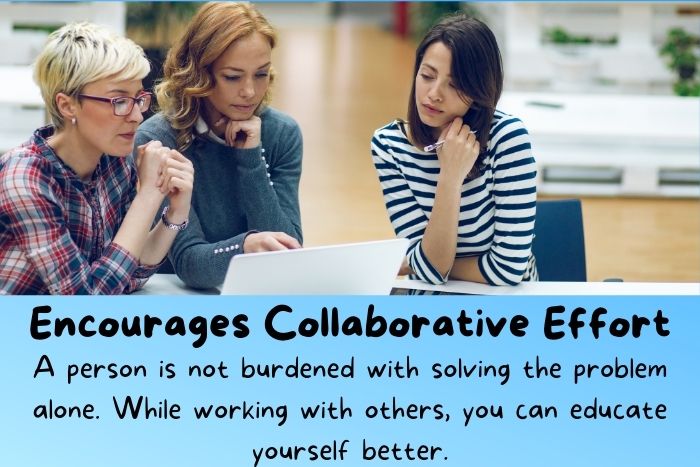 It is often noticed that there is a level of ambiguity in the information dispensed. Sometimes individuals also lack the necessary data to come to a sound conclusion.

Not to mention, most decisions involve numerous complex variables that might be tough for a person to examine individually. Collective Intelligence, however, functions towards eliminating all these variables.

Since the concept majorly focuses on a collaborative effort, a person is not burdened with solving the problem alone. While working with others, you can educate yourself better. If there is an error in your judgment, you are able to rectify it immediately because of the instant feedback. You are also able to examine different approaches to the same problem, which broadens your perspective of things. 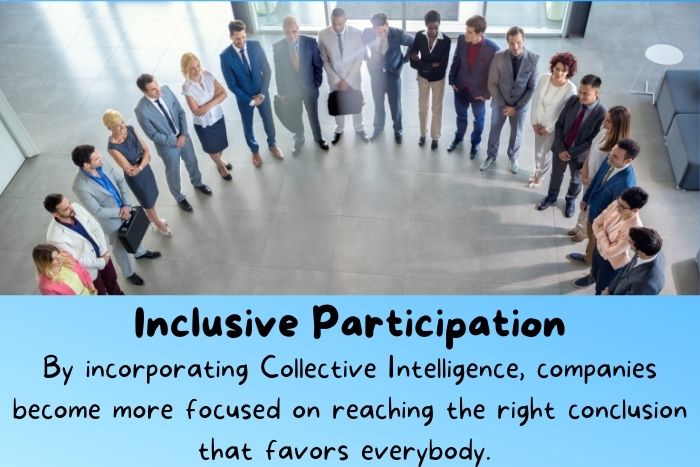 In an organizational environment, subordinates usually don't have a say in the final decisions. Sometimes the decisions do not work in their favor, which results in instant disagreement.

Ineffective communication is another common issue that leads to poor decision-making. The information is often poorly communicated to the subordinates, which makes implementation difficult.

Collective Intelligence allows you to give your input independently and encourages collaborative effort to reach a sound conclusion. This eliminates the variable of ineffective communication. The possibility of any confusion is instantly reduced significantly. 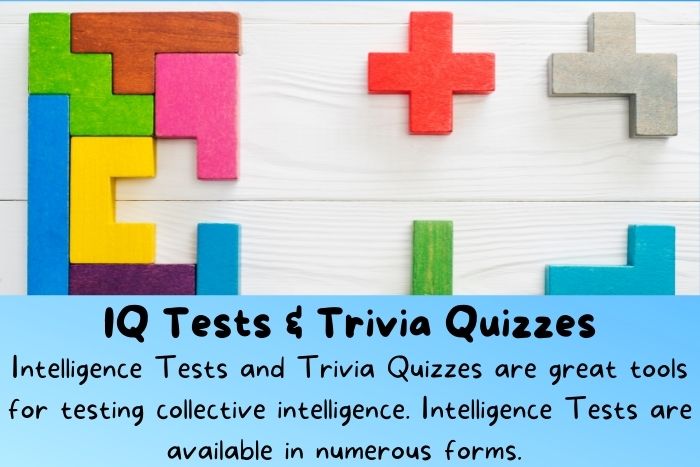 Intelligence Tests and Trivia Quizzes are great tools for testing collective intelligence. Intelligence Tests are available in numerous forms. Most of these tests produce an overall performance percentage and individual subtests scores. If you love trivia quizzes, check our Quiz Beez Home page for more fun.

Regardless of how the tests are designed, the chief aim is to measure general intelligence. Usually, these tests can predicate later intellectual development. IQ also corresponds to job performance and socioeconomic advancement.

By even interacting or competing with one another, information is exchanged within the group, further increasing the probability of solving and finding the right answers. This works because the crowd reaches a consensus by finding correct answers and dismissing incorrect information.

By hosting various Trivia Quizzes and IQ tests, a group of smart or intelligent people is collectively able to establish the truth and discard falsehoods. You can try and ace the quiz of the day with your friends or watch together trivia quiz videos.

The brightest minds have always paved the path for innovation. But over the years, the power of many has proven to be the most effective. In many ways, collective intelligence became the core ideology of every business or organization.

Collective intelligence effectively harnesses the power of a group to overcome numerous variables and obstacles. The revolution in technologies, especially by the coming of the internet, has brought collective wisdom to the forefront and made it popular.

Many companies use the aggregation mechanism to predict data and numbers far more accurately than traditional or old-fashioned methods.

A diversity of opinions with localized knowledge is shared and promoted within the organization that helps in reaching a common goal. All in all, there's no denying the fact that collective intelligence has opened a magical world of new possibilities for individuals. Each day we can discover something new through this remarkable concept. Considering everything we have managed to explore and invent, future prospects only seem bright.